The Unbreakable bond of the Big Brother Big Sister program

In this friendship, there’s never a dull moment. Their bond is unbreakable, and built over the past few years. 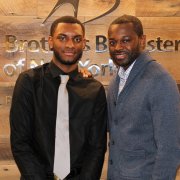 “I don’t have older siblings. I don’t have my dad in my life like that so having Nana Yaw there is like I have somebody to look up to and speak to," said 19-year-old John.

The dynamic duo was brought together Big Brothers Big Sisters of NYC.

“I think when we first met he talked about how he was always late, I’m always late as well,” said the Big Brother, Nana Yaw.

They are just two of the more than 5,00 pairings connected annually by the city's oldest and largest youth-mentoring program.

“I live in the Wagner Projects so my neighborhood is pretty bad, I lost a few people I grew up with, either dead or in jail," said John, "and when you see a lot of those things happen you don’t want to be in that predicament.”

He recently graduated high school —  the first to do so in his family — and is preparing to go off to college on a full scholarship.

‘I want to be a successful entrepreneur when I grow up, I want to be a CEO of a company and I want to come back to my neighborhood and give things to kids we didn’t have growing up,” John said.

Helping him each step of the way is his Big Brother, teaching him endlessly translatable skills.

“From interviewing skills, resume writing and you know just putting yourself out there,” Nana Yaw said.

“We’ve done community-service projects, we’ve built benches. I think I showed him how to use a power drill for the first time,” he added.

It’s been an ongoing process of growth, in more ways than one.

“I don’t think he was taller or bigger than me when we first started, so those growth spurts will do it to you. He’s also just become more mature and more confident in himself,” Nana Yaw said

That progress was also clear in the classroom.

“My average when I graduated was 87," John said. On the basketball court,  John has the upper hand. “I had a lot of minutes and points. I contributed a lot. I didn’t expect that.”

The court is just one of the areas in which the mentoring roles seem to have been reversed, even despite John’s torn ACL.

While they will soon be separated by hundreds of miles,  they’ll never stop being in each other’s lives.

And just for a little assurance, a gift cemented their bond.

“This will be a little something to remember me by,” said Nana Yaw, presenting his little brother with a framed photo of the two of them.